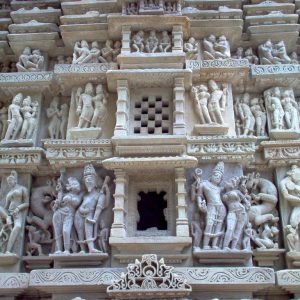 Khajuraho was sorrounded by a wall with eight gates at both sides of which were set two golden palm trees. Originally within the city walls were over 80 temples, but only 22 of them have been preserved up to us without breaking down and go broke, they are placed on an area of ​​about 21 square kilometers. One of the main reasons of the excellent state of preservation of these buildings is the fact that, unlike other parts of North India, the temples of Khajuraho did not suffered attacks or looting by man over the centuries. They represent a remarkable example of medieval Indian architecture and have gained some notoriety for the erotic sculptures which are decorated with a representation of the traditional lifestyle of the time. The temples of Khajuraho were all built during a hundred years, between about 950 and 1050 and were rediscovered in the late nineteenth century, when some of the monuments were covered by vegetation.